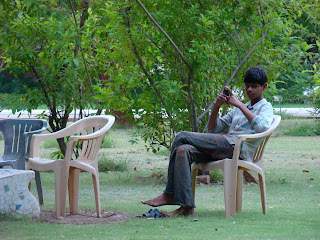 It happened a while back when we were going to Lothal on bikes early in the morning. Before going off, we were sitting at Chhota (canteen in MICA) for tea. I heard a rajasthani/kutchie folk song being played somewhere. It sounded interesting. It was coming off a cell phone of boy who worked at Chhota. (the guy in the pic) I asked him if it was radio and what channel. He said that it was mp3s. i was intrigued. i asked where he got it from. He replied 'internet pe milta hai na'.. He had downloaded the songs on a friend's cell phone, then from there he bluetoothed it to his cell.
we were all :O then. Among the ten of us who were going to the trip, hardly half had bluetooth or GPRS enabled phones. :P Here I am. I write paper on digital natives. Am intereseted in media effects of new media. and I still havent used bluetooth (except for on laptop). :|
It was a wonderful moment :D

August 19, 2009
i woke up today with 'happy together' by the turtles going on n on in my head. what a song! i heard it on loop for quite a few times before i got sated.

and then while on train, another song started doing rounds. i didnt even know the song. it was something i heard a while back while watching almodovar's 'tie me up tie me down'. god bless google and imdb. the song is 'resistire' by el duo dynamico. what a wonderful song. its one of those songs which makes u roll up ur sleeves and draw in the fingers into a fist to punch the air above.
now i want to know of resistance songs from south america. south america has a dynamic history and present of resistance and its poetic legacy is unparalleled. it would be a surprise if we can't find out some kickass stuff in this sphere.. resistance songs from south america.
even better even we could lay our hands on some native music.. that would be kickass. afaik, the conquistador's have been very successful in elimina…
Post a Comment
Read more

August 25, 2018
Things turn into cash
once they are stripped of their lives -
their breath,
their freedom,
their dignity
or their joy.

A fish on the table
and a cubicle dweller..
both are united in their solvency,
their ability to be stripped of their lives and turned into money.

This solvency is our own making
Hold up your hands against the sun and your favourite gods
Do they dissolve?
Hold up your heart and see if it beats for them
Hold your joys in your hands and fling them towards the system,
does it stick?

For a better world
first we need to walk away from this world.

The rich will always have heavier hammers

September 24, 2018
Just read this - ‘I want to help humans genetically modify themselves’
So a guy is obsessed with a certain technology, feels he can be a pioneer to a brave new world and justifies it to himself in bad faith by thinking - "This technology that I’m trying to do is for all of us. Whether you’re a big corporation or somebody in their basement, you have access to this stuff – everybody does. People respond very positively to that."

This, I believe is a dangerous belief - that tech can 'level the playing field' in a sense. It never does.
Internet was supposed to be the great leveler. And for a while with Yahoo anonymous chat and early days of mushrooming internet cafes, it really did feel that way. But soon enough, the powerful people have turned it into a tool that is more advantageous to their interest at the expense of common people's. Governments use it for surveillance and propaganda. Companies use it to brainwash people into buying things they don't need.…
Post a Comment
Read more