Showing posts from March, 2011
Show all

March 27, 2011
While taking out the battery charger out of the camera bag, I noticed that sand was embedded in it. Well, the last time i went anywhere with sand was mui ne beach in Vietnam. But then I saw some sand in the old camera bag too? it was different and sure couldn't be from Mui ne, because I was using other bag then. May be pushkar from last year? may be mcleodgunj, may be some other beach that I went to and forgot.  Travel :D
2 comments
Read more 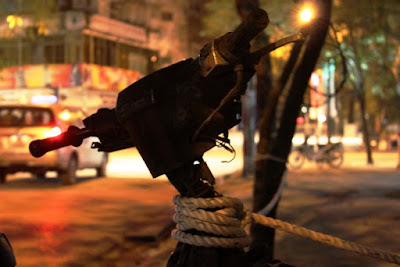 Camera. Its an amusement park packed into a small box really. Holding it by its grip transforms the world around. At times, it turns me into a detective out to capture secrets of the world no one was supposed to known. Most other times, after clicking the camera on, I recede into inconsequence to the surrounding. Much like fishing, I do not stir and I consciously remove myself from the life of the world moving by. I wait and I move slowly. The act of anticipation is so beautiful, its almost meditative. But then the pictures I tend to take are anything but striking. While taking the picture, I do not attempt at crystallizing a metaphor of life in a frame, or even to depict a representation of some facet of life. I just try to remember through my camera how awesome the life is. So more often my videos are like photographs (still and intent) and my photographs are like videos (not restricted to just one element, context included). With my camera, a sort of calm stillness fills me. I e
Post a Comment
Read more

On why there won't be a revolution in India

March 12, 2011
Tunisia woke up after a young man driven with frustration doused himself in fire . He cared for his dignity . People in Tunisia recognized that systematic stripping of dignity that the government was subjecting them to. Out of the flames arose the call for dignity so loud that it toppled several dictators. The pre-shocks of the Tsunami were felt at a town square where a shopkeeper could not take the abuse from the police anymore. He took up a fight on street. Quickly the whole town was baying for blood of police. Dignity had been earned back. However, Indians have given up on the very idea of dignity long back. Crimes against humanity get internalized by families as rules of the world. ('Its like that only') The idea of right and wrong is very unstable. For example, if a young couple gets hacked to death for daring to love even though being from different castes, the society will turn it into a tamasha where moral eyebrows would be raised about the character of the young cou
13 comments
Read more

On how it is ok to be ordinary

March 07, 2011
Ordinariness has such melancholic grace to it. Perhaps, its the finality of its evident fall that leads to submission, that stillness. Just saw the movie ' The illusionist '. Its script was written by Jacques Tati , one of the most wonderful film makers ever. Most of his movies are keen empathetic witnesses to the effect of modernity on a simple human existence. When I saw his movie, 'playtime', I was spellbound with the many layers of stories woven in a comic portrayal of  a man navigating a modern city. Watching the Illusionist, reminded me of the fragility of our identity. The movie is about a magician who is finding it more and more difficult to get work due to advent of modern entertainment of rock music and television. One scene is especially telling, when people in the cities are not at all interested in his acts, while in a village in Scotland, his acts gets appreciated. A woman tags along being awestruck with his ways. He tries to earn more to keep her happy,
2 comments
Read more

The country of clouds 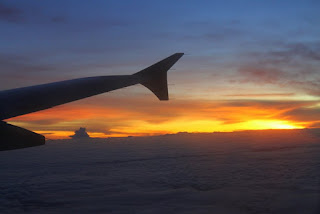 It never seizes to wonder, the flight. Up up and away! :D (Yes that's actually how my face looks like throughout the flight) (The first time I flew early morning towards Leh, I couldn't restrain my glee. My hands clutched at the handle not with fear but with hope to tame down my excitement. I would strain my neck to see out of the window. I couldn't help but laugh out loud with helpless blameless happinesss pouring out through my being. Well, many delays and lay overs later, the same excitement grips me on every single flight still.) Within moments you leave all that you have known. People shrink to impossible insignificance of small ants. Big imposing sky scrapers look like lego sets. As you peer down, you skip by distances so swiftly as if you have grown giant limbs and they are so far below that you can't feel them. Jumping over buildings and roads, my imaginary feet running with easy strides. And then comes the best part of it all. The clouds. :D Passing and
6 comments
Read more

March 03, 2011
was listening to Rob Dougan 's ' One and the same '. Its such a beautiful song. If you close your eyes while listening to it, it gives you a feeling of continuous upward motion. Not flying, but floating upwards. Like having achieved all that your life was meant for. A content smile playing on one's face powering the upward descent. (Hmm.. christian influence on me?) And then I saw a mosquito.. doing just about that. flying steadily upwards. I was jealous for a second there.
Post a Comment
Read more
More posts