Showing posts from November, 2015
Show all

November 30, 2015
in cricket.
So the day before I played in a tournament organised by the company I work for where I made a cool 54 runs not out in probably 25-30 balls. I even won the man of the match award. Unprecedented. Unbelievable.

Apparently, I hit 5 sixes and 4 fours. ya.. quite unbelievable. I don't remember ever scoring beyond single digits ever before. unless it was an underarm match against kids younger than me. (oh yes, i remember playing with my younger cousins 15 years ago and scoring 200+. It just so happened that we were playing in our attic, and not on the ground. but hey.. we had 'one tappa out' (one bounce out) as well. so that evens out. i hope. i chose to believe.)

Typically I bowl. More specifically, I don't bat. I suck at batting. My hand-eye coordination is as bad as that of Snake's. Well, at least a snake has the excuse of not having hands. I don't. And yet we languish at the same tai…
3 comments
Read more

November 17, 2015
This was written in response to a Quora question.
The question was "Why trend to purchase bullet bikes increased in India?"

I think bikes (as most other things) are bought not only for its functional relevance but for its psychological relevance. (If you can commute ably with a 35k bike, why would you spend a lakh more on a bike which essentially is a bulkier, less advanced machine?)

The purchase of bullet is purely a matter of fulfilling a psychological need. So the question is - what is the psychological need being met by Bullets and why are more people in India feeling that particular need?

Bullet is uniquely manly. While Pulsar is 'definitely male', it is also immature. Pulsar is boyish, bullet is manly.
Most fared bikes are positioned to younger audiences. They answer the need of adrenaline rush.. what we call 'potency needs'. Its the quintessential teenage need to feel on the edge. Bullet is not for these men (boys).
Bullet has been traditiona…
Post a Comment
Read more

The world is being overrun with zombies 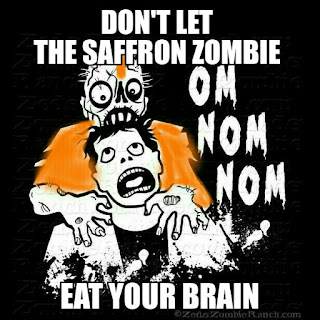 The rabid in 21st century do not get a Rabies shot. They get to run the nation.
The zombie apocalypse is already here. foaming at mouth. brains rotten. fangs out. Out to destroy the civilisation (as we dreamed of in 20th century), unmindfully. The zombies have worn different colors through the centuries and eons, so don't let the color fool you. Saffron, Green, red, cross.. all colors and symbols are rendered in blood of innocent people. The blood of weak ones who refused to become zombies.

Hatred is forced through the empty minds and hearts of the gullible through the television sets and newspapers. The TV set is the scalpel and hammer that is used in the mass lobotomy. The talking heads on TV eat out the faculty of reason and empathy from the brains and hearts of the weaklings. All that remains is a tangled mass of raw twitching nerves.

They rove the country in search of other gullible idiots, whose brains they can infect with sordid tales of imagined hurt sentiments. Stoked …
Post a Comment
Read more
More posts