Walls are inevitable, unless….

June 27, 2016
Today, UK decided to leave EU. EU itself has now far more ‘far right’ xenophobic parties in the European parliament than ever before in its history. On the back of very virulent xenophobia, Trump, otherwise a sideshow freak in the branding/entertainment industry, is now a presidential contender in USA – His promise of the ‘wall’ between mexico and USA garnering him followers among republican US citizens. India recently elected a right wing government with an unprecedented majority – putting majoritarian fictions in the central consciousness of the nation, instead of actual issues that need public debate. From Netherlands to Australia to Nigeria to Philippines… people everywhere are electing xenophobic parties and leaders. Are we collectively getting dumber? Or is their something beneath our collective psyches that needs recognition? 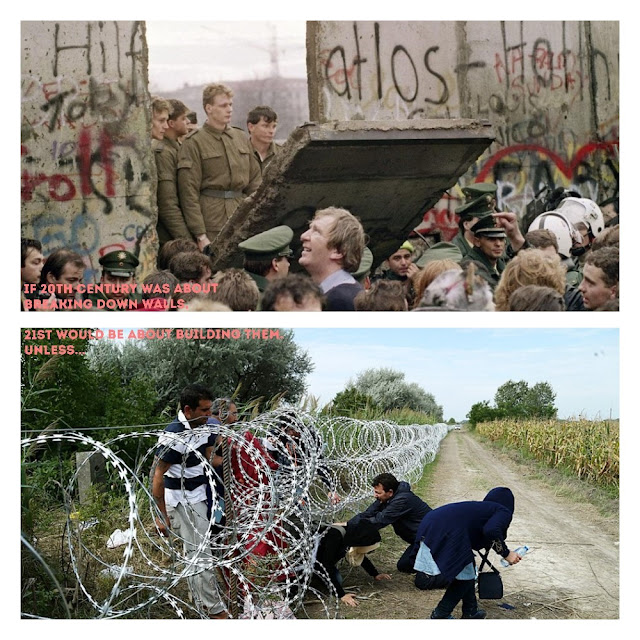 The fear of loss of control

If the last century was about opening the world with fast rails, concordes & the internet. This century would be about making sense of this uncontrollable openness and ensuing vulnerability that individuals & groups perceive.
If the last century was about the individual removed from his immediate world, this century would be about a new social consciousness of & want of belonging.
The openness of last century does not really benefit the individuals and small groups as much as it does to the big corporates and governments. The new government has already started to purge the internet of dissidents with arrests and threats. Facebook & Google collectively know more about you and you do yourself.
In a wall less world, you can’t even chose your adversary. you are vulnerable to dangers you don’t even know yet from people you would never know personally. wall less world is vulnerable and anarchic.
The only language of 21st century would be the doublespeak. People 20 years from now would only be able to read between the lines and sideways. They would be illiterate to direct words. Sarcasm would be the only humor.
The walls, that people would build to protect themselves would also aid bigger power centres to keep the people from organising. as a matter of fact, strategic walls would always be incentivised.
The walls are inevitable. Unless, we do something about it.

The global economic system incentivises capital consolidation and human alienation. Money requires no visa to move, and nor does it get racially profiled.
Free movement of people is allowed only so far that a cheap labour replaces a slightly better valued labour. Theoretically, this system of replacing new labour to the detriment of existing labour communities will go on forever, with consistently manufactured chaos ‘elsewhere’.
This is the real bed rock of current global capitalism – expanding margins for the 0.1% at the expense of lower and lower wages for labour everywhere and destruction of valuable ecological resources.
It pits labour in one nation against labour in another; one people against another. It manufactures a vicious competition until all working class people are reduced to serfs – minimum wage, maximum extraction of labour, minimum security.
The vote for brexit is due to economical anxiety of the working class which they incorrectly attribute to migrants. The rise of xenophobia across the world is a fallout of globalised capitalism that is increasingly alienating people. People do not realise that the ‘others’ are not taking away their jobs, machines are. Capitalism will turn the human into a machine cog, until it perfects machine to replace the human entirely.

The real reason for the wave of right wing zealots across the globe is the failure of imagination of left wing leaders. In absence of political movement that addresses current reality and works towards building an imaginative utopia, people default to the base values of hatred and selfishness. The world needs conceptions of each of our utopias.
The irony is the political party called ‘labour’ hardly represents labour’s interest. Even Communist party of India is but a mere joke on the national scale. The left cannot think for itself. It does not understand that it need not be a monolith – it need not follow the hairbrained and faulty conceptions of Marx, Stalin or Mao. It needs to devise an utopia and strategy by itself, putting one’s own people’s interest at the heart of political movement. Currently, Left cannot define a new reason, a new perspective on labour in the current world. and that is the modern tragedy.
The right response would be for labour across the world to unite against the 0.1% that is pitting them against one another. This is the make or break decade for sustainable future for global economy – from a sociological, economical and ecological perspective. It might seem somewhat counter-intuitive but, the world requires a left solution to save itself from descending into mindless chaos fueled by blind ignorant hatred.

February 04, 2022
lately i have watched quite a few movies where people get stuck in a time-loop. repeating the same day, every day, over and over again. palm spring. map of perfect tiny things. and ofcourse i have seen all the rest of them too.  today the thought anchored itself in my psyche though. what if i end up repeating today forever. a calmness flooded me. seriously. my mind was clear for the first time in two years. (covid hasn't been very good for my mind).  the first thought i had was to delete the whole work schedule from the day. all the meetings, ppts, calls... today i had a bunch of those and all of those were very skippable. so i would do that.  the second thought was to check what stock market is doing! maybe i could become a millionaire. i imagined everyday earning millions and donating it away quickly. may  it do some good. the day is stuck for me, but not for the rest of the people.  and that's when it struck me: if i could affect the world - every day - its just a multivers
Read more

February 04, 2015
1. -isms as wish fulfilment   People on earth followed/ believed in many different '-isms'. Communism, hinduism, capitalism, secularism, dadaism and so on.  These -isms were short cuts . They allowed for the believer to accept solutions without having to engage in empathetic discourse and recognition of an individual as a free yet malleable agent. They allowed them to accept solutions without a clear understanding of assumptions or use of consistent reason. Now we know that it is prudent to be sceptical of all -isms even if one agrees with most wishes that these -isms propose to fulfil. (and now one should not say that everyone should be sceptical, because that will turn into another -ism.) 2. A divided planet In a lazy intellectual divide (because you must divide) people on the planet earth were divided as either 'left wing',  'right wing' or 'fence sitters'. Right wingers were assholes who benefited from the status quo and prevailing inequality. Th
Read more