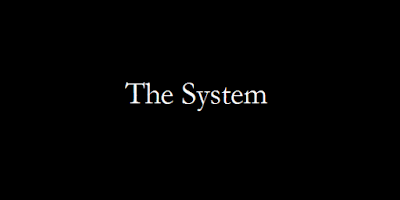 When people are talking about 'the system', what are they exactly talking about? When you fight against the system, who do you exactly fight against?
Why are some people successful without much effort, while some languish? Who does the system reward, whom does it punish?
Why do people kill each other? What causes people to think that a change is important? and what makes some ideas of changes possible, while some others simply die?

When we talk about 'the system' what we really mean to say is - 'power structure'. We are curious about the flow of power. (From where to where? who/ what is the source? how to get some? what makes it flow?)

If we believe Hollywood, the System is bunch of powerful humans who conspire in evil goals. (world domination, extreme wealth and so on.)

But that can't be true. Humans want to believe that they are bigger than they are. That they have power and control over things that they don't. That they can comprehend the world.
But humans can't.
(Hollywood sells dreams - ideas that we 'want' to believe, not the ideas that reflect reality. And as we become more obsessed with imagery, we live in the 'want' rather than reality. and hence advertising. and hence my paycheque.)

We are quite insignificant a species in the bigger scheme of things. But we have been incredibly lucky so far. But that doesn't mean that the power structure needs to be of an extra-terrestrial make. Just as the flow of wind doesn't require a sentient effort, so too, the flow of power doesn't require a sentient effort.
For wind, the key operating variables are pressure, volume and temperature. (essentially differences in energy.)
Similarly, power in human society has a key operating variable that dictates the flow and application. The key operating variable in this case however is very interesting. It is 'an idea.' a meme.
The idea that a man who lives above clouds has answer to all our ills...
The idea that reciting mumbo-jumbo will bring good fortune..
The idea that some people are lesser humans than some other people...
The idea that men are supposed to be macho... and a million such ideas.
all these are ideas that have affected humanity profoundly.
A meme tries to get copied into as many brains as is possible. That is its nature. and this nature defines the 'system'. The 'system' is the complex of ideas fighting for its fuel .. our selves.

A person 'charged' with high voltage idea, will try to spread the idea to as many people around him as possible. not dissimilar to the way electricity works. He won't stop unless people around him believe what he believes. We are forever marching in service of our utopias (meme of imagined ideal world.)

Real power is in creating and controlling these memes. People who manage to get themselves in critical nodes in the flow of ideas, prosper. Naturally, People resist moving out of advantageous positions in the flow of power. Hence nepotism and all sort of -isms.

Resources are real and finite. and hence scarcity is real. hence idea of survival is real. The idea of survival, when taken to its logical conclusion leads to ideas of ownership, control, exclusion and eventually to violence (and potential of violence). and hence power. and hence entrenchment of power.

Since only a limited number of people can really access resources for constructing their utopias, the  masses must be subverted, misguided or eliminated. Hence the proliferation of false wants, misguided framing of problems and solutions. Smoke and mirrors.
and hence power of ideas. first to clear false memes. then for self-interest.

Identify the system, before trying to game it/ subvert it/ prosper from it/ service it. It is not a person or a people. It is the ideas complex. Which idea would you rather let occupy you?

May 07, 2020
On our birthdays, do we really 'turn' a year older? or to put it another way what changes when we grow older? what does it mean to be 35, 59 or 87? there's the reality of degradation of body, accumulation of experiences, calcifying of certain biases and prejudices, getting used to certain rituals and practices and so on. but none of these things are linear. so why should age be? I wonder about notions of age among people in pre-industrial societies. they probably weren't as obsessed about linear growth as we are. Capitalism thrives on an ever expanding baloon of abundance and consumption. So that sense of growing permeates everything. we are supposed to get better, stronger, wiser, faster at everything. if we can't we are supposed to 'buy' tools for it. That's the basis of capitalism. if we stopped that want, the engine of capitalism will come to a grinding halt. Imagine yourself free of that want! no need for 'growth'. no sense of milestones. no
Read more