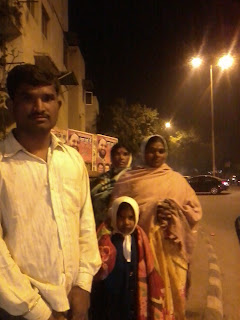 They were wearing clean clothes and they walked upright. They were trying to talk to people passing by but were quite meek so didn't always succeed.
When I passed by, one of them asked if I understood Marathi. I said I did. It was quite dark, late in night & I felt that it might be one of those begging groups so I was cautiously moving ahead anyways. But their meekness, their clean clothes & them being Marathi made me pause and listen.

I don't recall their names now. But I noted down one name that I think is relevant here - the name of the person who put them in a desperate situation - Rajiv Karade.
According to the guy in white shirt, Rajiv is a labour contractor who brought them from a village in Maharashtra. They specialise in the work of digging earth for laying of telecom cables. The men & women had worked with the contractor earlier near Mumbai too. After the Mumbai work, they were taken to Delhi for work here. After a few days of work in Delhi, the contractor went absconding. He didn't pay them their dues. Without shelter, without money they were left to fend for themselves in the cold weather of Delhi. None of them had prepared for the weather here and were carrying only thin shawls and pair of clothes.
Not knowing Hindi well enough, they were moving cluelessly through Delhi streets. They didn't have enough money to go back to their village. They were asking passersby, quite sheepishly, to help them.

In big cities, usually one listens with one ear only. The other ear is ready with disbelief to let go of suspicious characters. I told myself that it is not a good way to live - employing disbelief & uttering beliefs as per our convenience. So I stopped and listened.

At first, to help them pay for their tickets I gave them Rs. 160, as I only had change of that much amount. The man said thank you, but he also said that it would not be enough. The women then came and said that Rs. 500 would really help. At this point I again became suspicious as they upped their demand when they saw that I was ready to give. But then again, I didn't want to doubt their situation. If I was in that situation, even I would have asked for more from people who would have believed in me. So, I paid them another Rs. 500.

Apparently, there are quite a few other laborers who came with them and like them were walking around the town, trying to figure a way back home. It seems to be a bigger problem.

Last year, I had met another family of 3, again Marathi laborers, on the streets of Kolkata - Park street. Similar story, similar troubles.

Who are these Rajiv Karades of the world and how can we stop them? Anybody knows people in the business of manual labour in major cities? Can the labour department rein in such acts?
Is there any helpline or aid center for these kind of people in cities? Who do we direct these people to?
A city is a bewildering experience for many, still. Is their an organised body that helps the out-of-towners, the victims of scams, the clueless?
What can/ should we do now?
city life help laborers labour

Strider said…
so instead of believing as per your convenience you chose to believe as per your conveniently altruistic class guilt? listen, Fine! but whatever happened to listen and think? I had given money to one such family when I was in Bangalore. Enough to get them home in a train. Why did I see them playing the same gig another day then? You could have offered them a ticket home. train fares are way cheap. Do you think he would have accepted that? try it next time...
Tue Dec 18, 01:08:00 PM GMT+5:30

Ajinkya said…
true that. but the point is not whether i got hoodwinked or not. it doesnt matter. If there are people like these on the streets, there should be mechanisms to get them off streets.
Imagine if there existed a system where I could have called a helpline and directed these guys there. no question of me giving money, them acting/ being helpless..
its a very elegant simple solution that needs to exist. a helpline, a help kit. something.
The post is not about me, but about an opportunity to fix the system.
Wed Dec 19, 12:07:00 AM GMT+5:30

Strider said…
That would be nice. Nevertheless, you propose to fix the system based on the assumed innocence and predicament of these people. which in turn, perhaps, shows your innocence.
you did help some people make a living. perhaps they were lying to get it done. but then some other people get way more to do it in front of a camera!
and this isn't about the system either. innocents get help still and the best systems are duped by crooks. This one is about how they made you feel. This one is about you thinking you didn't do enough to help them or others like them. and that's alright. none of this is your fault. :P
Wed Dec 19, 10:14:00 AM GMT+5:30

inquisitiveguurl said…
Only if stories like these get printed in newspapers, they will get more attention. Have you contacted any journalists in Delhi? Maharashtrians wandering in Delhi without any warm clothes seem a genuine case.
Thu Jan 10, 12:25:00 AM GMT+5:30

February 04, 2015
1. -isms as wish fulfilment   People on earth followed/ believed in many different '-isms'. Communism, hinduism, capitalism, secularism, dadaism and so on.  These -isms were short cuts . They allowed for the believer to accept solutions without having to engage in empathetic discourse and recognition of an individual as a free yet malleable agent. They allowed them to accept solutions without a clear understanding of assumptions or use of consistent reason. Now we know that it is prudent to be sceptical of all -isms even if one agrees with most wishes that these -isms propose to fulfil. (and now one should not say that everyone should be sceptical, because that will turn into another -ism.) 2. A divided planet In a lazy intellectual divide (because you must divide) people on the planet earth were divided as either 'left wing',  'right wing' or 'fence sitters'. Right wingers were assholes who benefited from the status quo and prevailing inequality. Th
Read more